the crepes of wrath: book review

I’m a sucker for these “cozy mysteries”. The premise is simple: a usually small-town local business owner, going about their daily life, encounters a dead body. (Most that I’ve read have been female, so I’m going to go with that assumption, but male narrators are welcome!) Sometimes, she’s new to town and sometimes, she’s lived there forever. Anyway, this lady starts low-key investigating the murder, either out of curiosity or to clear their (or someone they know/love/are related to…) name. It works because the store owner is usually nosy in the best of ways, and people will talk to her instead of the police, because they KNOW her (and also, she’s not the police). Sometimes she’s close friends with the local sheriff and sometimes she’s not. Occasionally, there’s a love interest and occasionally there’s a love triangle. All of them end with the narrator stumbling upon the killer and then struggling for their life, ending with a narrow escape as the police/love interest/someone shows up just in time.

So, predictable, but I love them.

My OTSP (On The Same Page) Secret Sister, Kathleen, told me about NetGallery, a website where book reviewers can get ebooks for free in exchange for a review. Sweet. Only, my luck would be that the first book I received was actually book two in a series. Not wanting to jump in without knowing the origin of this main character, I read a sample chapter and then bought the ebook of the first book. All that to say, this review is obviously my honest opinion, and I also purchased the book. (The next review will be the one I received for free. Still honest opinions. All clear? Let’s move on.) 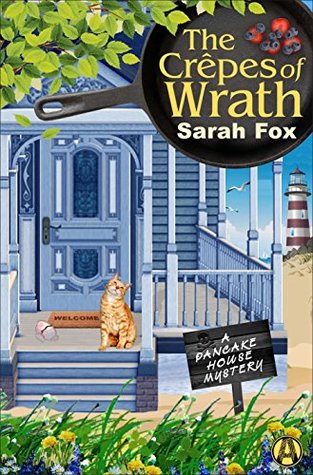 Back-of-the-book summary: In the debut of a delightful cozy mystery series, Sarah Fox introduces a charming new heroine who finds herself in a sticky situation: stacking pancakes, pouring coffee, and investigating murder.

When Marley McKinney’s aging cousin, Jimmy, is hospitalized with pneumonia, she agrees to help run his pancake house while he recovers. With its rustic interior and syrupy scent, the Flip Side Pancake House is just as she pictured it—and the surly chef is a wizard with crêpes. Marley expects to spend a leisurely week or two in Wildwood Cove, the quaint, coastal community where she used to spend her summers, but then Cousin Jimmy is found murdered, sprawled on the rocks beneath a nearby cliff.

After she stumbles across evidence of stolen goods in Jimmy’s workshop, Marley is determined to find out what’s really going on in the not-so-quiet town of Wildwood Cove. With help from her childhood crush and her adopted cat, Flapjack, Marley sinks her teeth into the investigation. But if she’s not careful, she’s going to get burned by a killer who’s only interested in serving up trouble.

Overall thoughts: I enjoyed this book. I found Marley to be a little stupid (there is a killer on the loose, woman! Don’t take unnecessary risks!) and a little slow to connect the dots (shiny new lock on the workshop that the key doesn’t fit? Someone else probably cut the old one off and put the new one on), but overall she was pleasant to hang out with. I enjoyed the budding romance aspect and the hint of a love triangle (though come on, I was rooting for Brett the whole time). I really like the dynamic between Marley and the employees at The Flip Side, which, by the way, can we talk for a second about the pancake house? I think that place is what dreams are made of. The beach and pancakes.

Okay, moving on. We don’t get much time to know Jimmy at all, but I kind of wish we had (which I guess is kind of the point, so good job there). Ivan, the possibly-scary chef, is wonderful and I’m just so amused by him and then Tommy. I think Ray should answer his dang phone more often, but then again, I’m also not a sheriff. I was initially cautious of Brett, because he seemed so…intimidating?… at first and I wasn’t quite sure what to make of him. That changed pretty quickly, mind you, and I also really like Chloe. I feel like Marley needs more girlfriends. Speaking of, it also took me a while to figure out about how old Marley is. I’m guessing around 32, but I’m still not actually sure if that’s right.

Also, this was only available as a kindle book. I don’t actually own a Kindle; I just use the app on my phone. I’m not a huge e-reader person, but it wasn’t actually bad reading it from my iPhone. I’d definitely do it again and I don’t think that hindered the book’s experience any.

Final comments: Will I read the next book? Yes (especially because I already have…).
Would I recommend the book? Probably, if someone likes these cozy mysteries.
Would I read other things by this author? Sure, if it’s something that looks interesting.
My rating: four out of five stars

Have you read THE CREPES OF WRATH? What did you think of it? Let me know in the comments!