for whom the bread rolls: book review

My OTSP (On The Same Page) Secret Sister told me about NetGallery, a website where book reviewers can get copies of upcoming releases in exchange for honest reviews. That’s how I got this one from Alibi. All opinions are my own, and as I mentioned in the review of the first book, I purchased that one in order to properly review this one. 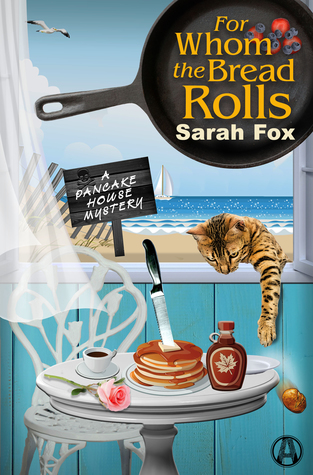 Back-of-the-book summary: From the author of The Crêpes of Wrath comes another decadent cozy mystery. This time, pancake house owner Marley McKinney is tangling with a salty troublemaker . . . and a ravenous killer.

Tourist season’s in full swing in the small seaside town of Wildwood Cove, and Marley McKinney couldn’t be happier. Since taking over the Flip Side restaurant, she’s made a few close friends, adopted a cat named Flapjack, and started dating her childhood crush. The only cloud on the horizon is local nuisance Ida Winkler, who blames Marley for landing her nephew in prison. Trying to get a rise out of Marley, Ida’s been making crank calls and even vandalizing the pancake house.

The police can’t do much about the pranks, so Marley sets out to bury the hatchet once and for all. But someone’s beat her to it—in the most shocking way possible. After stumbling across Ida’s dead body, Marley’s suddenly the number-one suspect in her murder. Clearing her good name is going to be a tall order, but Marley’s not about to let Ida keep ruining her life—especially from beyond the grave.

Overall thoughts: Let me start by saying that I’ve seen some reviews where the reviewer, like me, received a copy of this book for free. Some of these reviewers didn’t read the first book, which is strange to me as it’s the second one in this series. However, take that into account when you read their reviews and this one, because I think that’s an important bit.

Okay. So this one opens with Marley back in Wildwood Cove, living in the house Jimmy left her and running The Flip Side. We’re instantly met with trouble of the Ida Winkler variety, both at the restaurant and at Marley’s home. That trouble only expands when Marley finds Ida dead in her garden shed, landing herself a spot on the suspect list in the process.

Now, we know Marley didn’t kill Ida, and the Sheriff eventually gets around to agreeing, but Marley does a lot of worrying in the process. I can understand that, I guess, but she’s never really the main focus. She swims in the ocean a lot (someone else pointed out that we rarely see her take a shower after these swims, so does she shower before getting dressed again or going to bed? As a beach girl myself, you want to shower. It takes like two seconds to write in a shower – ‘after a quick shower’ or ‘she jumped in the shower and then crawled into bed’ – and it removes all doubt) and overthinks her relationship with Brett just as much. I get that one, too – relationships are scary. It just got a little repetitive.

She has a few false starts, like normal cozy mysteries, when investigating Ida’s death. I actually thought the investigating part of the book was pretty good. I had no idea who did it (and Marley didn’t either), but I think it all tied together pretty well. Marley spends about as much time investigating the murder as she does concerned about some bouts of illegal dumping near the river, which seems to derail the story a little, but I think that (without spoiling anything) it’s a solid addition and also gives the town some added character at how willing they are to come together to help fix the problem.

I really enjoyed that Marley asked Ivan for help a little bit, and that she’s becoming better friends with Lisa, Chloe, and Patricia (remember what I said in the last review about Marley needing more girlfriends?). A minor complaint I have is that the book title doesn’t really match the story… I like it, but it doesn’t quite seem to fit. Marley’s still a little stupid, in the “oh let me go for a run even though someone had been killed and we don’t know why” way, but overall, I like her.

Final comments: Will I read the next book? I think so. I’m curious as to how The Flip Side goes and what happens with Marley and Brett.
Would I recommend the book? Probably, if someone likes these cozy mysteries.
Would I read other things by this author? Sure, if it’s something that looks interesting.
My rating: four out of five stars

Have you read FOR WHOM THE BREAD ROLLS? What did you think of it? Let me know in the comments!